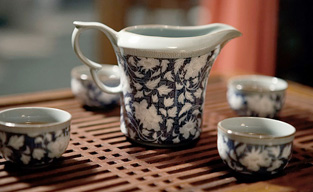 Tea is made from the leaf of the plant Camellia sinensis. Shortly after harvesting, tea leaves begin to wilt and oxidize. During oxidation, chemicals in the leaves are broken down by enzymes, resulting in darkening of the leaves and the well-recognized aroma of tea. This oxidation process can be stopped by heating, which inactivates the enzymes. The amount of oxidation and other aspects of processing determine a tea’s type. Black tea is produced when tea leaves are wilted, bruised, rolled, and fully oxidized. In contrast, green tea is made from unwilted leaves that are not oxidized. Oolong tea is made from wilted, bruised, and partially oxidized leaves, creating an intermediate kind of tea. White tea is made from young leaves or growth buds that have undergone minimal oxidation. Dry heat or steam can be used to stop the oxidation process, and then the leaves are dried to prepare them for sale.

Tea is composed of polyphenols, alkaloids (caffeine, theophylline, and theobromine), amino acids,carbohydrates, proteins, chlorophyll, volatile organic compounds (chemicals that readily produce vapors and contribute to the odor of tea), fluoride, aluminum, minerals, and trace elements. The polyphenols, a large group of plant chemicals that includes the catechins, are thought to be responsible for the health benefits that have traditionally been attributed to tea, especially green tea. The most active and abundant catechin in green tea is epigallocatechin-3-gallate (EGCG).

Among their many biological activities, the predominant polyphenols in green tea―EGCG, EGC, ECG, and EC―and the theaflavins and thearubigins in black teas have antioxidant activity . These chemicals, especially EGCG and ECG, have substantial free radical scavenging activity and may protect cells from DNA damage caused by reactive oxygen species . Tea polyphenols have also been shown to inhibit tumor cell proliferation and induce apoptosis in laboratory and animal studies . In other laboratory and animal studies, tea catechins have been shown to inhibit angiogenesis and tumor cell invasiveness. In addition, tea polyphenols may protect against damage caused by ultraviolet (UV) B radiation, and they maymodulate immune system function. Furthermore, green teas have been shown to activate detoxification enzymes, such as glutathione S-transferase and quinone reductase, that may help protect against tumor development. Although many of the potential beneficial effects of tea have been attributed to the strong antioxidant activity of tea polyphenols, the precise mechanism by which tea might help prevent cancer has not been established.

Tea has long been regarded as an aid to good health, and many believe it can help reduce the risk of cancer. Most studies of tea and cancer prevention have focused on green tea. Although tea and/or tea polyphenols have been found in animal studies to inhibit tumorigenesis at different organ sites, including the skin, lung, oral cavity, esophagus, stomach, small intestine, colon, liver, pancreas, and mammary gland, the results of human studies—both epidemiologic and clinical studies—have been inconclusive.

This information is provided by:  The website of the National Cancer Institute (http://www.cancer.gov).

World traveler, believer in the health benefits of white tea.